Greece has been a star performer for tourism this year, recording a 121 per cent rise in foreign holidaymakers between January and August compared to 2021. The country also dominated a list of European destinations with booming tourist arrivals – a useful starting point if you want a second home somewhere popular and with lots of flights from the UK. We take a closer look…

Greece, with its famous Islands, has lost none of its global appeal since the pandemic, with foreign visitor numbers during July and August this year exceeding pre-pandemic levels. Only two other European countries achieved this, namely Turkey and Albania, according to statistics from a leading travel intelligence specialist.

Similarly, research by ForwardKeys showed that no less than six Greek hubs are included in a top 10 ranking of European destinations where the number of foreign tourist arrivals between July and September this year exceeded the same period in 2019. We shine a light on each of these and choose a glorious property for sale there.

The view from a three-bedroom Mykonos property

The glamour spot of the Greek Islands, Mykonos saw tourist numbers up 29 per cent this summer (compared to 2019). Unsurprising, given it’s a hang-out for the global jet set, who pack out its hip beach bars and clubs in peak season. Mykonos Town, or Chora, with its maze-like Cycladic architecture, charming waterfront and nearby beaches is where most of the trendy action takes place. Two other popular and family friendly areas are Ornos and Agios Ioannis.

Mykonos has international cachet, which is reflected in its property prices. This stunning new villa in the Fanari area occupies a private spot with panoramic views but is still just 6kms from the bright lights of Mykonos Town, 7kms from the airport and 4kms from the beach. 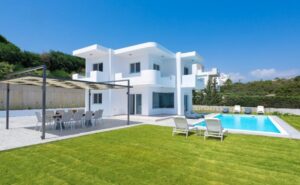 also recorded a 29 per cent jump in tourist arrivals this summer. According to travel giant TUI’s Holiday Atlas (Summer 2022), it is now the fourth most popular holiday destination for Europeans.
Spanning 50 miles from cosmopolitan Rhodes Town, complete with its famous medieval quarter and harbour, in the north to the wind and kite-surfing paradise of Prasonisi in the southern tip, Rhodes offers an exotic melting pot of cultures, historic sites, pretty beach resorts and charming villages. On its east coast, Faliraki is arguably the island’s most touristy stretch of coast. But house-hunters wanting a more Greek community should head south and look areas like Afantou, Genadi, Tsambika and Kalathos, or the island’s jewel in the crown Lindos, a stunning white town located between picturesque sandy bays. This brand new five-bedroom villa in Afantou would be the perfect base for year-round living or enjoying regular breaks on the island. 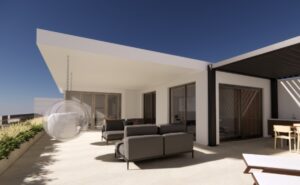 Greece’s largest island and the country’s most popular destination for foreign homeowners, Crete’s two main gateways Chania and Heraklion welcomed 26 per cent and 23 per cent more visitors respectively this summer compared to 2019.

Life in Crete is based largely around its northern shore, with the mountainous and craggy interior and southern coast being sparsely populated. The island’s western half, home to Chania, is a favourite with foreigners in search of the more traditional lifestyle. The Apokoronas district, located between the cities of Chania and Rethymnon is especially popular notable around Kalyves, Almyrida and Kokkino Horio. Inland, the main town of Apokoronas is Vamos, and traditional villages popular with expats include Stilos, Drapanos and Gavalochori

A notable area in the east half of Crete is Mirabello Bay, located an hour from Heraklion beyond the package resorts of Malia and Hersonissos. There, an increasing number of carefully designed villas and boutique developments are springing up around the harbour towns of Elounda and Agios Nikolaos.

For soaking up the laid-back Cretan lifestyle, this luxury three-bedroom penthouse within walking distance of the beach at Kalyves and with views across Souda Bay would tick all the right boxes. 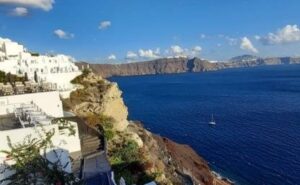 The view from this Oia, Santorini home

Breath-taking Santorini, with its mesmerizing location and celebrated cubist architecture, welcomed a 20 per cent hike in tourist arrivals this summer (compared to 2019). Like Mykonos, Santorini has serious cachet, thanks to its combination of incredible landscape with chic lifestyle, which means premium property prices to match. Formed from a volcano that rises out of the sea, the prized eastern side is home to villages that drip over the edge of towering cliffs, giving properties magnificent views.

The most sought-after areas include Akotiri in the south, Oia in the north – famous for its sunsets, and the central area of Imerovigli and Thera in the centre. For beach properties, head to the west coast and resorts of Kamari and Perissa. You’d never get tired of the view from this one-bed house in Oia, complete with outdoor Jacuzzi. 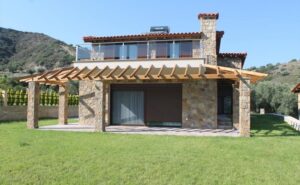 The exterior of this Central Macedonia home

The second largest city in Greece, mainland Thessaloniki is the sixth Greek destination enjoying a notable uplift in tourist numbers this summer (+17 per cent compared to 2019). The city itself is a cultural cosmopolitan gem, but it’s also a gateway to the stunning Halkidiki peninsula, which splits into three smaller peninsulas – namely Kassandra, Sithonia and Athos. The area is prized for its unspoilt beaches, lush landscape, mountaintop villages and for being largely undeveloped. Only Kassandra is geared up for tourism and where foreign buyers in these parts tend to head. Resorts or fishing villages to consider on its west coast include Nea Skioni, Sani, Siviri, Fourka and Loutra, while on its east side are Hanioti, Afitos, Paliouri and Kallithea.

Tap into the authentic Greek lifestyle at this three-bedroom detached house near the beach in Nea Skioni.
www.rightmove.co.uk/properties/85794912#/?channel=OVERSEAS