Alex and her husband Chris had lived in their south London ‘box room’ flat for six years when they decided they were ready for a change.

They wanted to stay in London for work and to be close to family, and they dreamed of finding a house with more living space and a garden. It also needed to be within budget, but still have fast Tube links into the city.

What they couldn’t have planned for when they started their search was that within just a few short months, during a freezing cold winter, they would pick up the keys to their Edwardian house. The property – that came with no working kitchen, bathroom, running water, or heating, but plenty of damp and mould – was in an area they had never heard of, and on the opposite side of the city to their current home.

And so began an epic five-year renovation project that has become an ongoing labour of love – and their dream family home.

After spending years working in the fashion media industry, Alex set up The Frugality blog in 2012, with a mission to make fashion more accessible and affordable for everyone.

Ten years later, Alex’s website has grown to become a hugely successful business and a full-time job, thanks to her approachable style and sensible money-saving tips.

When Alex and Chris felt they had outgrown the flat they owned in south London, she applied her practical money mindset to working out where they could afford to live without having to leave London.

“We were lucky enough to own a small flat in an up-and-coming area when we decided to move, which helped us to get on the ladder to buying a house.”

They used the Draw A Search feature on Rightmove to highlight the whole of London, and set their maximum budget, to start them off. “We were both excited to experience new areas and maybe fall in love with somewhere we hadn’t visited or known about before,” she said.

But when the couple started comparing properties in different parts of London, they quickly realised they would need to narrow their search down to areas within their tight budget.

“We viewed a lot of properties on Rightmove which were lovely, but as soon as we saw this Edwardian house in north London – which was in an area neither of us were familiar with – we were just wowed,” she recalls.

“Everything about this home felt a real change from our gardenless flat. It had all the elements we were looking for: a wide hallway, three generous-sized bedrooms, a garden (any size would do in London!), as well as typical period home features: tall windows, high ceilings and an amazing original tiled floor in the hall.”

This house viewing was different from most of the other properties they had seen. There was no one living there at the time, and the top floor had been pretty much cleared out. 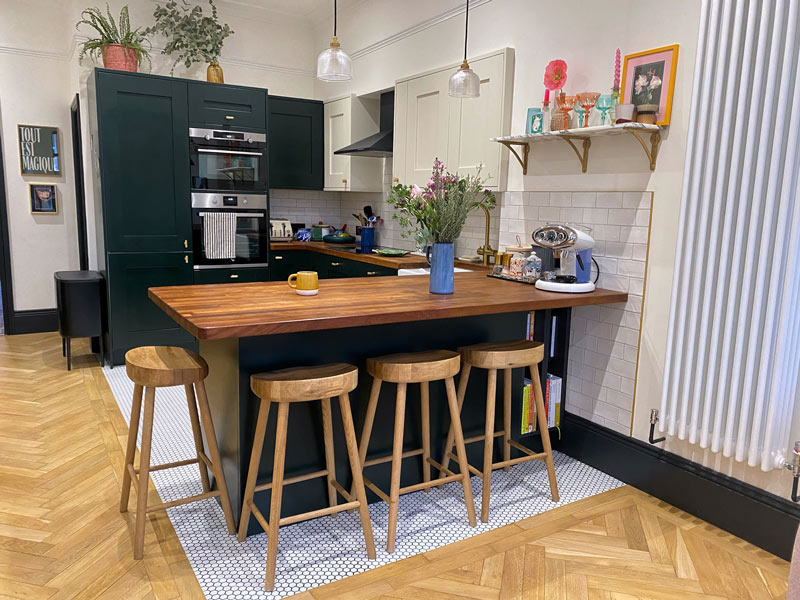 “But then other rooms, such as the dining room, were filled with furniture (we couldn’t even look in or see the garden), so we made a lot of our judgements from floor plans. It had such potential in terms of space, all the rooms were amazingly sized (especially coming from a flat where one of the bedrooms was a box room), and the garden was, again, decently sized by London standards.”

But the house was at the top of their budget, and it was part of an equity release mortgage scheme, which meant the sale would need to complete within 30 days.

They needed to move fast, and Alex and Chris’s flat wasn’t even on the market yet. They told the seller’s estate agent they thought their own flat would sell quickly, but of course, there was no guarantee.

They spent the next two days resigned to thinking the timelines were just too tight, and it wasn’t meant to be.

“Then Chris met me after work to tell me that an offer was put in on our flat for the asking price, and he hoped I didn’t mind but he had put an offer in on the house! We were so excited, but we also knew it was still a long way from being ours,” she said.

“Of course, that didn’t stop me from researching dream paint schemes and stained-glass doors – it felt within reach!” 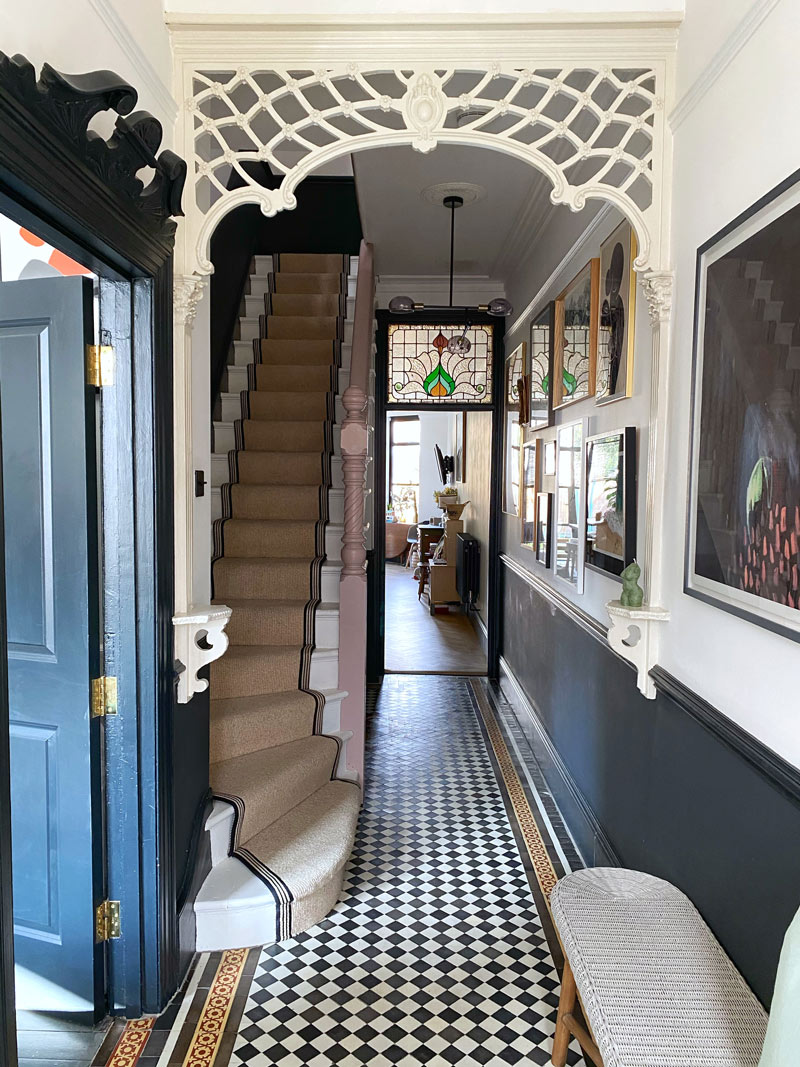 They viewed the property a few more times before the purchase went through, once with Alex’s dad, who “looked horrified” when he first saw it.

“Although the home had lovely bones, it wasn’t really in a ‘liveable’ condition – it had no central heating, no working kitchen, it smelt of mildew, there was mould and years of grime up the wall, with lots of exposed pipework upstairs.”

Alex and Chris had stretched to the absolute top of their budget when they put their offer in to buy the house, and they knew they were going to have to live in it even before some of the most essential renovations began.

“We met a builder and a plumber in the house before completion, so they could potentially start the first bits of work in January – mainly a bathroom so we could wash, and heating so we weren’t freezing. These were our first priorities and everything else would have to wait until we had more money.”

“To be honest, the rest of the move was a blur,” laughs Alex.

Their south London flat, which had been snapped within just 48 hours of being on the market, was being bought by first-time buyers, so there was a small chain without too many hiccups.

Just 30 days after having their offer accepted, the couple were ready to make their move to their new north London neighbourhood.

“As it was Christmas, and quiet on the roads, the most direct route was through central London, and it felt quite symbolic making that drive across London.” 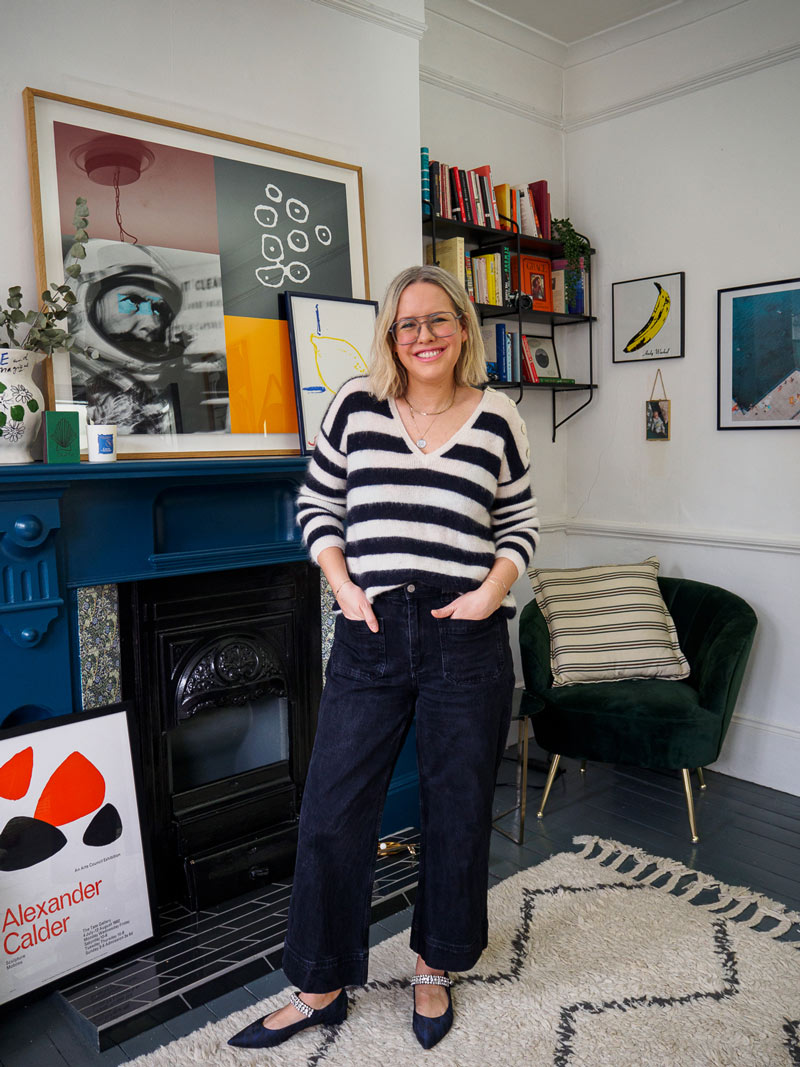 However, when they arrived outside their new home, they learnt there had been a delay with one of the payments to complete the sale, so they had to sit outside our new home for six hours before they eventually got the keys.

“We had dinner plans with Chris’s brother, fully expecting to be settled by 8pm, but once we unpacked all the boxes from the van, it was 10pm and we hadn’t even set up anywhere to sleep!”

“I hoovered the floor quickly (yes, there were mouse-droppings) while Chris set up our bed. My mum had given me a fresh length of spare carpet. which I put on the floor next to the bed so my feet had something cosy to step onto in the mornings, because the house had bare floorboards and no heating, and it was December,” she recalls.

Everything was a mess, and they knew they had a lot to sort first thing, including a gas meter for a start. There was also an unused electricity meter on the wall in one of the bedrooms which wasn’t accounted for, which would take them months to find out who it was connected to.

“But there was still so much excitement, we knew we could make it our dream home,” says Alex. 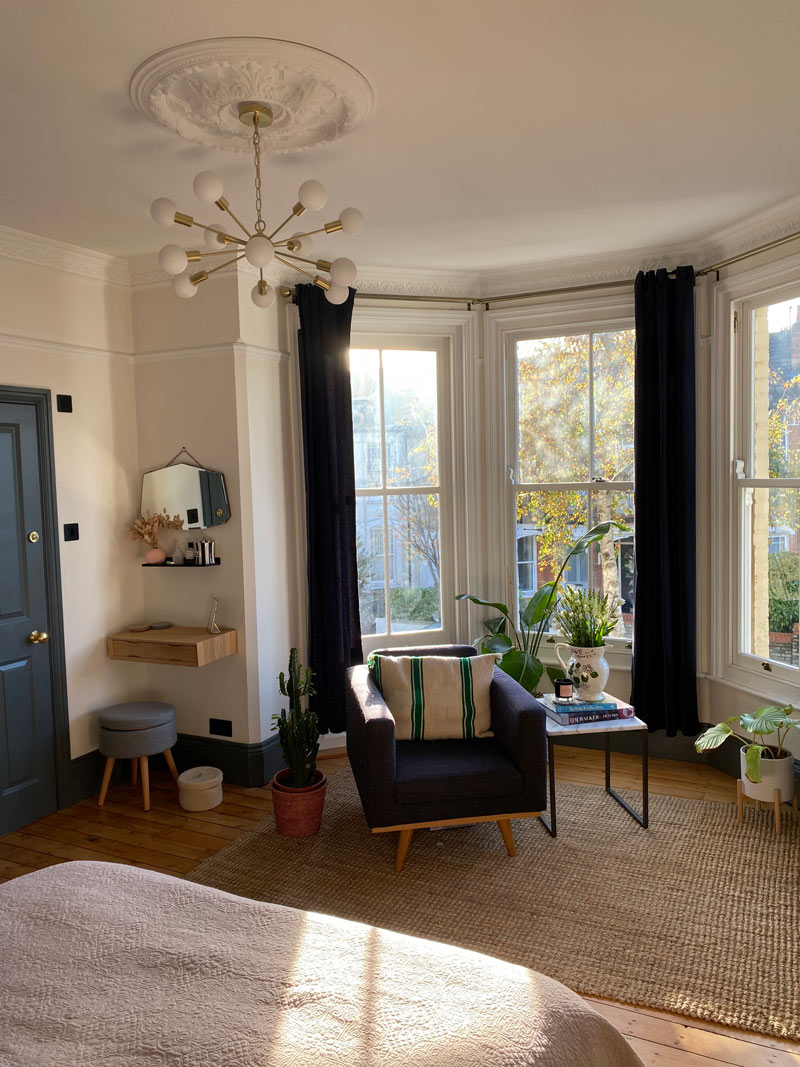 “A tin of paint can do wonders to a room in terms of transforming, cleaning it up and making it feel liveable,” says Alex.

“And lots of our friends had old tins going spare or half used – we painted the living room basic white when we moved in and, five years later, it’s still the same.”

This room became the hub of the home and was constantly in use, as a kitchen, living room and home office, all in one.

“We plugged in a portable hob and our renovations began.”

“I remember those first few months before we had a working bathroom. For a while we didn’t have running water while the water tank was removed, so we put buckets around the house to be able to fill up the toilet cistern, and to wash our hands.”

“We showered at friends’ houses, we bought gym passes to wash and we’d sleep in our coats until the radiators were installed!” 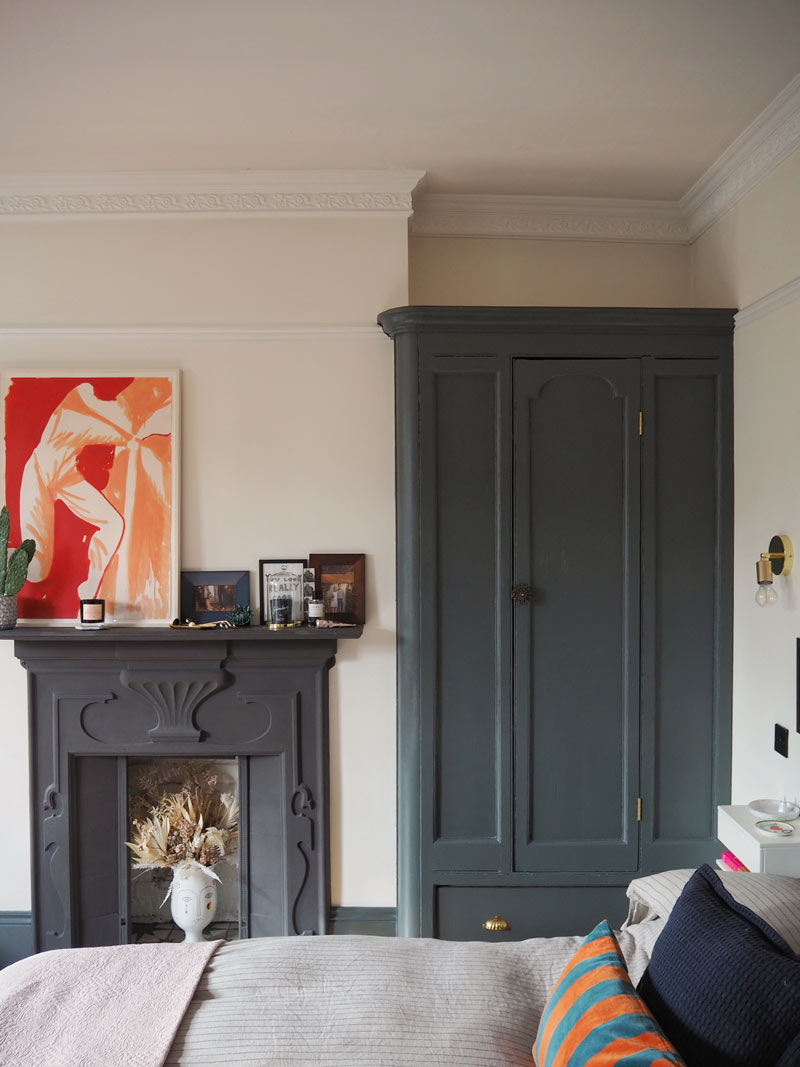 Five years later, the exterior of the house still needs a lot of work, including a new roof, front windows, pointing, and a balcony revamp.

Framed prints add pops of colour, and their ‘lockdown triumph’ was a new kitchen: a bright, open-plan space with forest green cabinets, Crittal-style floor-to-ceiling windows and doors, and striking herringbone flooring made from reclaimed oak from an old school gym.

“Inside we’re almost there, and two kids later, this house in desperate need of TLC has become our family dream home,” says Alex.

“There’s not a day that goes by when Chris and I don’t say to each other: ‘I can’t believe we live here’.

Everyone has a moving story. Share yours with us for the chance to be featured on Rightmove. Share your story here.

READ MORE: Leaving the city to buy a farm was our right move